Normandy: An Angel for Lena Wrenn 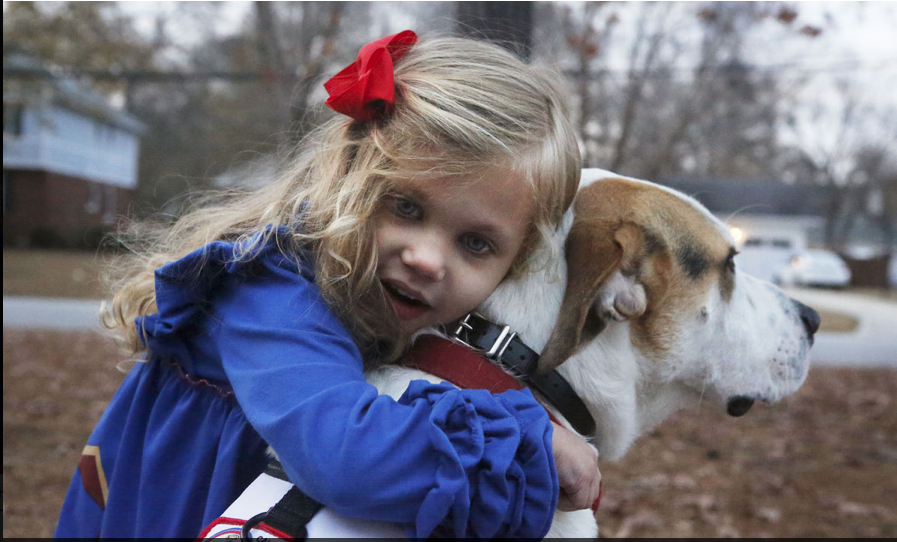 BY MEGAN MAY Morning News mmay@florencenews.com

FLORENCE, S.C. – The Bannings have had a life-changing addition to their family of four: a dog.

Lena Wrenn has autism, epilepsy and various other neurological disorders. On top of this, she also has a rare genetic disorder, IQSEC2 gene mutation.

Shannan says because Lena Wrenn’s gene mutation is so rare, doctors don’t exactly know all of the side effects or a prognosis for the future.

The Bannings say this affects all areas of Lena Wrenn’s life. Although she is four years old, developmentally she is more like an 18-month-old; she has very limited verbal ability, can only eat soft foods, and has physical challenges such as walking up and down stairs. Most troubling for her parents is she doesn’t respond to pain and often has seizures that cause her to stop breathing. Shannan says at one point Lena Wrenn would have a seizure about every week, but that didn’t mean she would stop breathing every time.

Although it took over two years to get a diagnosis for their daughter, the Bannings knew something was wrong with Lena Wrenn when she was still just a baby.

“She didn’t sit up on her own until after ten months and you know, babies should sit up on their own by then,” said Shannan. “I knew when she wasn’t hitting all her milestones.”

“There was some type of slow development,” Benjie added.

A big fear for the Bannings is when their daughter has seizures in her sleep.

“What’s scary is, at night she’ll have seizures and she’ll stop breathing. We just watch the monitor,” said Shannan. “It’s basically like every night we just roll the dice.”

Benjie said he’s slept on Lena Wrenn’s floor multiple times, and they often have to check on her throughout the night to try and have peace of mind so they can get some sleep themselves.

Another challenge as parents is that Benjie and Shannan don’t know what the future holds; Lena Wrenn can continue to improve in her development, or she could suddenly begin to regress.

“That’s one of our biggest hurdles,” said Benjie. “Because we sit there and, I mean, what does five years look like? What does she look like as a ten-year-old? As a fifteen-year-old?”

One thing the Bannings do know is they will be working with Normandy to make their lives a little easier. They hope that the dog will be an extra set of eyes on Lena Wrenn, making sure she doesn’t walk out the door on the chance that it is unlocked, keeping her away from hazards such as a hot stove or helping her up and down the stairs. He will also be used as an epilepsy dog, alerting the Bannings when Lena Wrenn is about to have a seizure.

Benjie first heard about Canine Angels Service Dogs from a friend at SOS Health Care Inc., a nonprofit geared towards providing services for people with autism. He was put in touch with a family who had a service dog, learning more about what a dog could provide for Lena Wrenn.

A big obstacle, however, was the cost. Not only is there a lump sum needed in advance, the family will have to pay for years of training so Normandy is tailored to Lena Wrenn’s exact needs.

That’s where Jennifer Stone comes in.

Jennifer works with Benjie, but only recently found out Lena Wrenn has special needs.

“As a mom I can’t imagine having to resuscitate my child,” said Jennifer. “I mean even one time would be enough to drive me nuts. So if this animal could come to the point where it could sense her seizures and be able to alert on her to get the medication — that can give mom her sanity back. I know, as a mom, a dog could be a life-changer.”

Jennifer decided to hold a chicken bog fundraiser. Friends of hers — the Hanna family — had volunteered with Cooks for Christ, an organization that holds seven fundraisers per year to help families who have fallen on hard times. Jennifer thought they could do the same for the Banning family.

Over just about a month and a half, the chicken bog fundraiser was organized and the day of the event had come.

The Bannings said they were hesitant at first about the fundraiser because so many people in the community have needs. Once they did agree, they were surprised at the outpouring of support.

“It was very overwhelming,” said Shannan. “People that you didn’t even know, and they want to take time out of their life to do this; it was very humbling.”

After the chicken bog fundraiser, Stacy Mims from Schoolhouse Bar-B-Que organized a raffle for the Clemson University versus University of South Carolina football game. The winner of the raffle won either a Clemson or Carolina golf cart.

Between the two fundraisers, the Bannings had the majority of the funds needed to purchase Normandy. The picked him out of a pack of about 18 from Canine Angels Service Dogs in early December, and have begun training one-on-one with trainer Rick Kaplan.

They hope after about two years of training, they will see a drastic difference in their day-to-day life because of the dog. That difference would not have been possible if it weren’t for the community that came out to raise funds for the family.

The Bannings want to give a special thanks to Jennifer and Roy Stone, the Hanna family, Denise Eaddy and Stacy Mims of Schoolhouse Bar-B-Que, Florence Baptist Temple, the Shelley family and Darlington Shredding Co.

“People didn’t know there was a little girl in need, but once people started finding out they really came in and started helping out,” said Jennifer Stone. “It was quite awesome, it really was.”