Bobo is recovering from Copperhead bite

From The Sun News 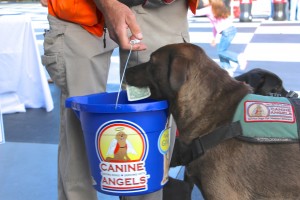 reality that recently struck an area resident and his dog.

The likelihood of running into a snake and being bitten drops drastically in the winter months, but anytime there’s a warm period like the weather pattern in the Myrtle Beach area during the last weekend, snakes could be out again, said Russell Cavender, known as the Snake Chaser. He said he had about 15 snake calls between Nov. 14 and Nov. 19, a relatively high amount considering the month, but not surprising with the weather.

On Monday, a dog with the Canine Angels, which provides free service dogs to disabled veterans, was bitten, according to Rick Kaplan, who trains dogs and created the Canine Angels. Kaplan said he hopes his experience – which had a happy ending – serves as a reminder for others to watch out and be prepared for snakes. “We got our boy,” he said. “He’s going to be fine, so if this serves as a reminder, that’s a good thing.”

He suggests that people be aware of surroundings, sticking to walking paths and carrying a walking stick or something else that could help keep a snake at bay. Kaplan also suggested that dog owners research the wildlife in their area, have their veterinarian’s emergency number programmed into their phones, and always know where the closest emergency vet is located. Kaplan said he was on a pack walk at the Vereen Memorial Gardens in Little River with Bobo, a lab mix who weighs about 70 pounds, when the dog was bitten by the snake. He said the dog apparently stepped on a copperhead. 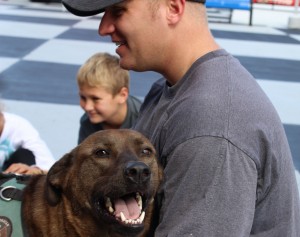 “I heard this loud squeal come from [Bobo] and he literally jumped three feet in the air, straight up,” Kaplan said. “I knew something was awry. Right there on the path was a copperhead snake, maybe three feet long.” Kaplan said he wacked the snake with his walking stick before pushing it off the pathway then sped to the car. “Bobo had two big marks from the fangs at the bottom of his paw and he was in agony,” he said.

Kaplan said the dog got drowsy shortly after getting to the car. Bobo was taken to Grand Strand Animal Hospital, where he spent the night for treatment. He said Bobo is on the mend, but not completely healed. There’s still swelling in his leg, which at one point was three-times its normal size, Kaplan said. “I was like a mother hen thinking my boy’s going to die,” he said. “When I think about that, it’s not about the 1,000 hours I spent training him, or the eight months I’ve had him or the money we spent. It’s that I love him and he’s going to die and there’s not really a thing I can do about it.”

Cavender said copperheads are designed not to be seen, and can be especially tough to spot in pine straw or leaves. The danger in a bite varies widely, he said, depending on the age of the snake, how much venom is released, the location of the bite and other factors. He said if someone is bitten by a venomous snake, it will be obvious in a matter of minutes because of the pain, and medical help should be sought. Cavender suggests wearing proper footwear, such as hiking boots, as protection. He said copperheads typically bite at the ankles or lower and sandals won’t provide any barrier. Staying on paths may help. He also said use a stick or something else before reaching for Frisbees, balls or other such items that may have been dropped in wooded areas.