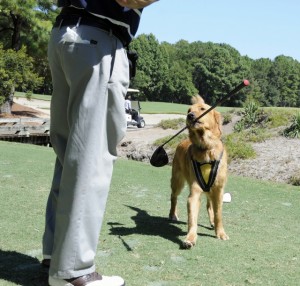 PAWLEYS ISLAND — In the midst of the four decades Rick Kaplan visited the Grand Strand on golf vacations, he worked his handicap nearly down to scratch.

But in the past four years, his game has gone to the dogs.

Kaplan’s golf rounds are now almost entirely dedicated to training the pack of dogs he has rescued from scheduled euthanasia to prepare them to become free service dogs for injured or disabled military veterans.

The retired New York City jeweler created Canine Angels four years ago, and said he established it as a charity two years ago when he moved to North Myrtle Beach.

“I made a living because veterans gave me that opportunity by putting uniforms on, so this is my time to pay back,” said Kaplan, 67. “We have filled a need. We help everybody. We save the dog and we help save the veteran. Everybody wins.” 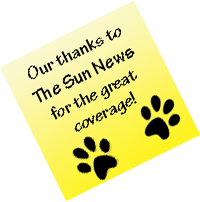 Kaplan has an uncanny ability to relate to dogs and will provide an obedient pooch to veterans if it can assist them in any way. While the veteran will receive a dog trained to perform important and valuable tasks for them, if they play golf, they’ll also receive a dog trained in caddying and golf etiquette.

The dogs of all breeds and sizes are trained to either be in the golf cart or heel to it, as well as retrieve balls, tees, bunker rakes and clubs without allowing any part of the club to drag on the ground.

“Anything to make it easier for a disabled golfer,” said Kaplan, who estimates he’s now a 10 handicap. “The key is to get them to pick up any object, so the object doesn’t matter, getting it is what matters.”

The dogs are trained to be still and quiet while players are hitting, to stay off greens, and to do their business in the woods. “Part of the golf they have to learn is the etiquette for other golfers,” Kaplan said. “Now if I could teach them to swing a club then maybe I’d really have something. I could sit in a cart and watch them play.”

Kaplan has 40 dogs in his program and he works with about a dozen at a time. The majority of the others are in foster homes receiving general obedience at Kaplan’s direction before they replace an outgoing dog in his pack and receive more intensive training.

“The dog has been great. It’s really amazing,” said James Miller of North Myrtle Beach, a retired Air Force veteran who suffers from depression and post traumatic stress disorder and plays golf with his Canine Angel, Toby. “If I didn’t have Toby, with the depression, I’d probably stay in bed all day. He gets me up, stays on me and keeps me going. It’s phenomenal really.”

Kaplan said he has provided about 40 dogs to veterans in the area in the past two years, and about 15 of those veterans play golf with their new companions.

He had 11 dogs in tow at Caledonia Golf & Fish Club and True Blue Plantation on Sunday and Monday at different stages of training. Three had already been working with their veterans, a few were nearing completion of their training, and Cruiser was the problem pup of the group, as the English chocolate Labrador had only been with Kaplan for a few days and was excited and antsy.

Kaplan’s 14-year-old dog, Freddie, has the privilege of riding in the cart. Kaplan said Freddie can detect when a person is about to have a seizure and alert them, and he assisted Kaplan through a period of seizures following a car accident. “He saved my life, that dog,” Kaplan said. “For eight years that dog detected seizures for me and allowed me to be free and live a life.”

The training sessions aren’t without growing pains. Kaplan said he has learned to turn the cart key to the “off” position because two dogs have hit the accelerator pedal while hopping on the cart, landing the cart in a lake. “So I learned my lesson,” Kaplan said. “The cart goes off every time.”

Kaplan assists veterans in Horry, Georgetown and Brunswick counties, and he wants to limit his reach to the three counties. “I serve this area and that’s all I want to do,” he said. “I don’t want to be regional or national. I want my dogs where I can reach them.”

Three dogs were placed with veterans within the past couple weeks – two in Southport, N.C., and one in Murrells Inlet.

He goes in search of dogs about to be killed at shelters once he places a dog and has an opening. “I save the ones I think I can do something with,” Kaplan said.

Kaplan said it costs approximately $10,000 to train each dog, including food and veterinarian bills. It usually takes six months to a year to train them, and it can take another three to six months to train the veteran how to utilize them and care for them. “That’s just as hard or harder,” he said.

Kaplan said the service relies on volunteers and he doesn’t have a salary, and it is entirely funded through private donations, though Horry County Council recently provided a $15,000 grant. Area golf courses comp his training rounds.

“This is a team effort,” Kaplan said. “I’m the enabler; I’m the trainer. But without the cooperation of businesses and people who understand we’re doing this to not only save our local dogs in shelters, but we’re doing it to pay back our veterans who sacrificed everything for us, [it wouldn’t work].”

The dogs in Kaplan’s pack sleep in his bedroom “on or around the bed,” said Kaplan, who divorced years ago. “That’s why I don’t have a girlfriend, there’s no room in the bed. What woman is going to stand for this?”

View all posts by: Gary